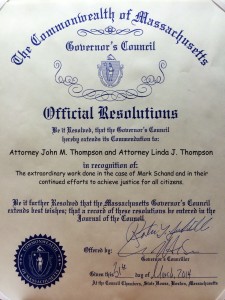 Earned for the exoneration of Mark Schand.

Thompson & Thompson P.C. was honored by The Governor’s Council on the 31st of March, due to our efforts on behalf of Mark Schand, during his Motion for New Trial. We are grateful to have received such a commendation. It’s outcomes such as this, coupled with the safety and satisfaction of our clients, that drive us to strive for excellence in justice.